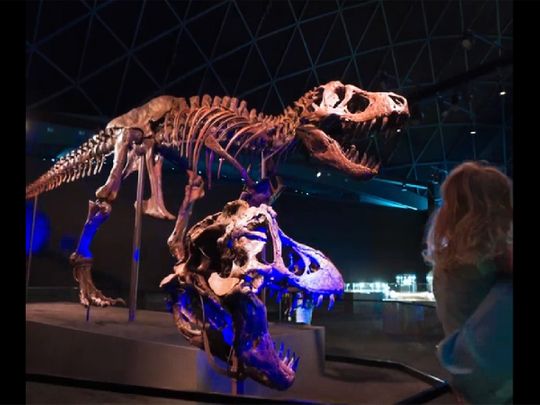 Abu Dhabi: Do you want to see the biggest piece of moon to ever hit the earth? Or the bones of prehistoric four-tusked elephants that once roamed the Al Dhafra region?

A 13kg lunar meteorite and the tusks of a primitive elephant known as the stegotetrabelodon will join the famous tyrannosaurus rex (T-rex) fossil, Stan, and the Murchison meteorite, at the upcoming Abu Dhabi Natural History Museum. Dubai. At the moment, they are also on display at Manarat Al Saadiyat as part of an exhibition that will run until May 12.

“Many people in Arabia don’t realize the geological and fossil history of Arabia and the reason they don’t realize it is that there was no natural history museum here. Museums are inspiring and educational and natural history museums play an important role in educating people about the history of our universe,” said Dr Mark Beech, Head of Archeology for Al Dhafra and Abu Dhabi at the Department of Historic Environment of Department of Culture and Tourism Abu Dhabi (DCT Abu Dhabi).

“This is the first time that a natural history museum has been [looking at all of this] through an Arab lens and thus gives a local perspective on the development of flora and fauna. This [also] tells us of a time seven million years ago when Abu Dhabi had elephants, crocodiles, hippos, giant rivers, saber-toothed cats, hyenas and even early horses – all living in the area of ‘Al Dhafra,’ he added.

The Abu Dhabi Natural History Museum is set to open specifically in the Saadiyat Cultural District on Saadiyat Island. Early announcements have sparked excitement about Stan, the 67 million-year-old skeleton that is among the most intact and best-preserved dinosaur specimens in the world. The skeleton was auctioned off by auction house Christie’s, and Abu Dhabi recently announced it would be available for research and study at its new home.

The accomplished archaeologist and published author has himself been involved in paleontological research in Abu Dhabi, including that of the Baynunah Formation, a sequence of sandstones and mudstones, in the Al Dhafra region which contains fossils dating from the Upper Miocene period.

One of Dr Beech’s finds in Ruwais – a two and a half meter long upper tusk of a stegotetrabelodon elephant discovered in 2002 – is actually on display at the Manarat Al Saadiyat exhibit.

“Natural history museums play a very important role in life. People get to know about the history of our universe, from the beginnings of the universe, the development of our solar system, the geological formation of planets, the emergence of planets, and different geological ages. The Abu Dhabi Natural History Museum will also make us think about the future and the fragility of the planet. After taking visitors on a journey over millions of years, it will take you to the present day and encourage people to think about how we can live more sustainably and take better care of our planet in the midst of global warming. , plastic pollution [and other challenges]said Dr. Beech.

According to the researcher, the museum will join an elite network of natural history museums that are helping to advance humanity’s understanding of the ages and the universe.

“This museum will join a large network of natural history museums, including those in London, Paris, Washington, Berlin and Chicago. All these international museums are doing very important research work and the Abu Dhabi Museum will play a leading role in the development of natural scientific research in the Middle East. This has been absent so far,” explained Dr. Beech.

Housed in the cultural district of Saadiyat, the museum will also “fill a gap” in Abu Dhabi’s cultural offerings, complementing Louvre Abu Dhabi as a universal museum, the upcoming Zayed National Museum focusing on the national history of the Emirates. Arab States and the Guggenheim Abu Dhabi as a museum. contemporary art platform.

Stan, the T-rex fossil: Stan is a 67 million year old Tyrannosaurus rex fossil found in the Hell Creek Formation in South Dakota in 1987 and excavated in 1992. It is the fifth fossil of T -rex the most complete discovered to date and with 199 bones, the skeleton is approximately 60% complete. It is 11.7 meters long and about 3.64 meters high at the hips.

Notably, Stan also has the best preserved skull of any T-rex ever found and Dr. Beech said the skull is imitated in casts and replicas in museums around the world. The skeleton also shows multiple healed wounds, allowing researchers to draw conclusions about a T-Rex’s life and environment.

In October 2020, the fossil sold for $31.8 million (116.96 million dirhams) at auction, making it the most expensive dinosaur specimen and fossil ever sold.

Scientists have speculated that the meteorite could be a comet fragment. It’s made of stardust – tiny crystals formed in stars that explode billions of years before the Sun begins to shine. Propelled through space, this stardust mixed with the cloud of gas from which our solar system formed, and so the meteorite provides clues to the types of stars that existed before, the composition of our solar nebula and the formations of the elements of The Periodic Table. Stardust is billions of years older than our Sun and is estimated to be seven billion years old.

One of the largest moon chunks ever found at 13kg, the lunar meteorite that landed in Western Sahara, identified as NWA12691, is also on display as part of the Natural History Museum’s collection. A collection with an asteroid launched this particular rock from the surface of the moon into space and into the gravitational pull of the earth.

The meteorite is larger than any moon rock collected by astronauts.

Remains of Stegotetrabelodon: Discovered in the region of Al Dhafra, these remains bear witness to prehistoric life in the United Arab Emirates. A femur and mandible from a baby stegotetrabeolodon, as well as an upper tusk from an adult, are on display and are part of the museum’s collection.

Baynunah Formation: The Baynunah Formation is a sequence of sandstones and mudstones mainly of fluvial origin and containing fossils at several levels. Up to about 60 meters thick, the formation is exposed over more than 200 km of the Abu Dhabi coastline in the Al Dhafra region.

Experts have so far discovered several fossils of creatures in the formation, including that of fish, birds, monkeys and other creatures, indicating that the area once had a large winding river system with forests on its sides. flanks.

These fossils are not yet on display, but will be part of the Natural History Museum when it opens.

Neurodiversity and Disability Discrimination at Work