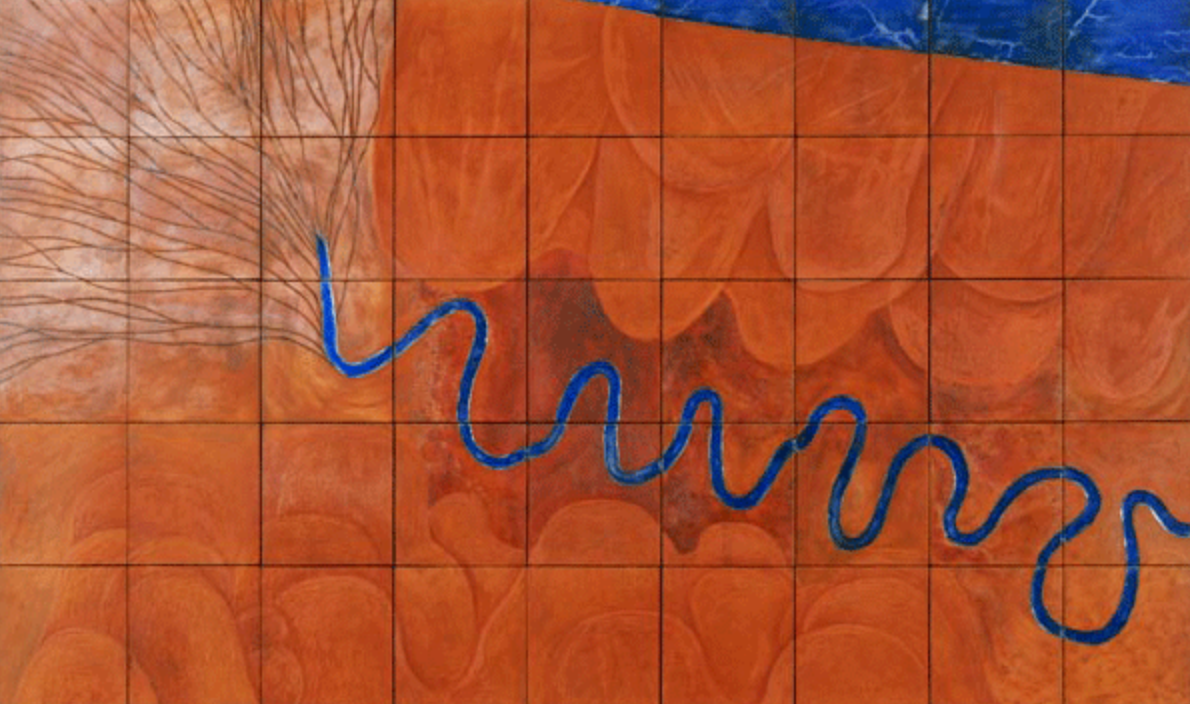 Born in the northern suburb of Wollonong (NSW coast), Graham Oldroyd (1953-2022) was a highly regarded and influential ceramicist and painter. He died over the weekend at his home in Perth.

Although he is perhaps best known for his large ceramic mural in the Members’ Hall of the new Parliament in Canberra, he also had a passion for teaching, research, enamels and travel.

Oldroyd was commissioned, along with painter Michael Ramsden, to do the extensive mural – consisting of six separate multi-panel works – for the opening of Parliament in 1986-7 (the artists were big fans of Gough Whitlam and asked him to add his initials while they were finishing the job).

At the time, Oldroyd was working extensively in the field of architecture, pushing the use of ceramics in interesting ways. Friend and author, Wendy Walsh (née Jolliffe) said of the commission: “Graham embarked on a year of glaze experiments which were used for the beautiful series of ceramic panels.

“I often watch the evening news on TV marveling at the politicians being interviewed…they stand in front of the beautiful ceramic mural called Six Odyssey River by Graham and painter Michael Ramsden. This important legacy will be seen by Australians sitting in their living rooms watching the news for probably the next hundred years.

Walsh added: “Graham’s stature in the art world is undeniable…(her) artistic passion for technical experimentation with clay and glaze is a testament seen in a body of superb, often sculptural creations .”

It was a view shared by the curator of the Museum of Applied Arts and Sciences (MAAS), Eva Czernis-Ryl. She described Gra (signing her emails) as “very nice, open and generous, although I knew he had a hard time talking about his work”.

She spoke about Oldroyd’s passion for glazes and a conversation she had with the artist as she prepared for the recent exhibition clay dynasty at the Powerhouse Museum, where Oldroyd’s work was part of an investigation tracing 50 years of studio ceramic practice in Australia.

Czernis-Ryl continued, “Just a few months ago we talked and corresponded at length about his beautiful copper-red enamel bottles, one of which is on display at the clay dynasty exhibition…Oldroyd spoke of his love for Islamic ceramics, he recalled: “…When I was 17 I saw Alan Peascod doing a demonstration at a local festival in Wollongong and I followed. I watched him for hours and at the end when he was packing up I asked if he could teach me. He said yes. Two years later, Alan, his fabulous wife Jean and I were on a trip to the Middle East.

‘Oldroyd added: “My fascination with the chandelier later took me on several trips to Egypt and I was able to work with Said El-Sadr in Cairo at his studio in Fustat.”

Walsh said of this love for sharing his passion for Egyptian ceramics: “In the 1970s, he gave me Egyptian earthenware scarabs and ushabti dolls from his ceramic study stays in Cairo. On a trip to Italy in 1980, I witnessed his love for all things made of earth – from Etruscan objects, from Italian Renaissance majolica to Islamic chandelier pots.

Czernis-Ryl continued, “His personal work was to reinvent Islamic glaze traditions lost in Egypt. [And] As a teacher, Oldroyd passed on his passion for ceramics and Islamic arts to generations of students. His passing is a profound loss for the ceramic community.

Less is said about Oldroyd’s passion for painting. In many ways, this brushwork and gestural aspect of glaze application is perforated beyond the vessel. There was a clear connection between his practices.

Who was Graham Oldroyd?

From 1972 to 1973 Oldroyd studied ceramics at East Sydney Technical College (ESTC, later known at the National Art School) under the late Peter Rushforth (1920-2015). He also studied at Sturt Pottery in Mittagong and the Canberra School of Art during this time.

It was at this time that he began his research into Islamic ceramic forms and experimental glazes, traveling to Egypt, Iraq and Turkey.

During this time (1981) he received a fellowship to study Islamic glaze and ceramics with Said El Sadr in Cairo, and in 1984 was invited as a visiting lecturer abroad at the Camberwell School of Art from London.

From 1985 to 1986 Oldroyd held the position of Head of Ceramics Division for TAFE NSW. But then his attention shifted.

In 1988 he established a partnership with Philip Lakeman as Lakeman Oldroyd Architectural Ceramics, working on architectural commissions in Asia for several years until 1993.

This eventually transferred to the Pesamuan Ceramic Studio as a lead designer in 1995-97, headquartered in Bali, Indonesia, and remained involved with the ceramic tile business as a production manager. company until his death.

His works are in the collections of the Victoria and Albert Museum in London, the Art Gallery of Western Australia, the Artbank, the Powerhouse Museum, the Australian Embassy in Cairo, Hota (formerly the Gold Coast Regional Art Gallery), Manly Art Gallery, Wollongong Art Gallery, among others.

In addition to the Parliament, major orders were for hotels in Singapore, Bali, Jakarta, among other corporate buildings.

Oldroyd “retired” to Bali in 2013, but moved to Australia in 2018, to Perth with partner Atmoko Sapto. He continued to draw and paint until his death.