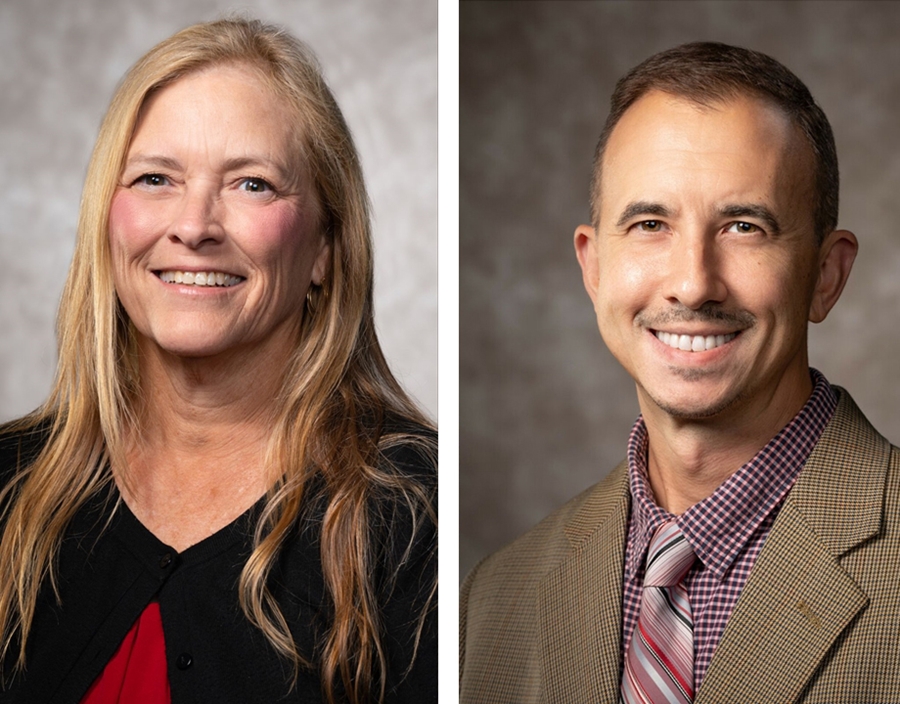 Both employees will be honored at a staff celebration event in the fall and invited to attend the University of Alberta employee banquet in October. Additionally, the two will receive a certificate and monetary award for their selection and will be featured in the Arkansas union’s Employee of the Year display later this year.

Shoemaker is the recipient of the Employee of the Year award in Category I: Professional/Non-Faculty-Administrative. As Building Coordinator and Office Administrator, Shoemaker is instrumental in the construction operations of the Cordia Harrington Center of Excellence and in the administrative management of offices within the Office of Student Success, including Graduation and Retention, University Perspectives and the Center for Learning and Student Success.

In her letter of appointment, Shoemaker was described as “the backbone of the Student Success Center”, someone who expertly wears many hats on a daily basis and a beloved staff member of past and current students who regularly visit. the center to seek its support and guidance.

Shoemaker has worked on campus since December 2010. Prior to her employment with the Office of Student Success, she held positions in the Advancement Division and the Student Affairs Division. She is also a college alumnus, with a bachelor’s degree in agriculture, and proud mother of a current U of A student.

“I came back to college because I love being on campus,” Shoemaker said. “Even when I didn’t have a student here, I loved the university lifestyle and the interaction with the students. It’s encouraging to see the enthusiasm of the students and their new ideas and approaches to today’s problems. ‘ today. And as a lifelong Razorback fan, being on campus also keeps me close to Razorback sports.”

Vince Capps is Employee of the Year for Category III: Technical/Paraprofessional. As IT Support Specialist for the Office of Student Success, Capps oversees technology systems within the Cordia Harrington Center of Excellence, evaluates solutions compatible with campus-wide technology goals, administers servers, provides staff training and more. He oversees a team of three student workers who service technology needs throughout the building.

In his nomination letter, Capps was applauded for the energy and enthusiasm he brings to day-to-day tasks. He has been described as one of the most genuine staff members of the Student Success Center team and passionate about improving IT for student success in a way that benefits staff and students. students.

Capps has been employed on campus since 2015, first as an IT Support Specialist for the Graduate School and International Education, then bringing his expertise and passion for technical support to the Office of Student Success in October. 2021. He was instrumental in the successful opening of the Cordia Harrington Center of Excellence in spring 2022.

Cassandra Nelson, one of the student employees reporting to Capps, said, “Working in IT at the Student Success Center has been a great learning experience for me, not only transitioning into a professional environment from school, but also in my ability to solve problems and work in a team. Vince has created a work environment that encourages learning and collaboration in everything we do. His passion for what he does, along with his compassion for those around him, makes Vince one of – if not the – kindest and most effective people I’ve ever worked with.”

Both Shoemaker and Capps were instrumental in the successful opening of the Cordia Harrington Center of Excellence and in ensuring that the building and technology continued to operate at peak performance so that colleagues and students using the space and its services can achieve their professional, academic and personal goals.

“I believe working with good people is important because it makes the work environment more enjoyable for everyone,” said Danielle Dunn, Director of Operations and Early Action and Supervisor of Shoemaker and Capps. “It also has a positive impact on our students who come to a place with a sense of respect and confidence in their work. The Student Success Center is an outstanding place that does great work in large part due to the efforts of Carolyn and Vince. Happiness at work is being able to work with great people, and I’m lucky to have two of the best people working with us at the Student Success Center.”