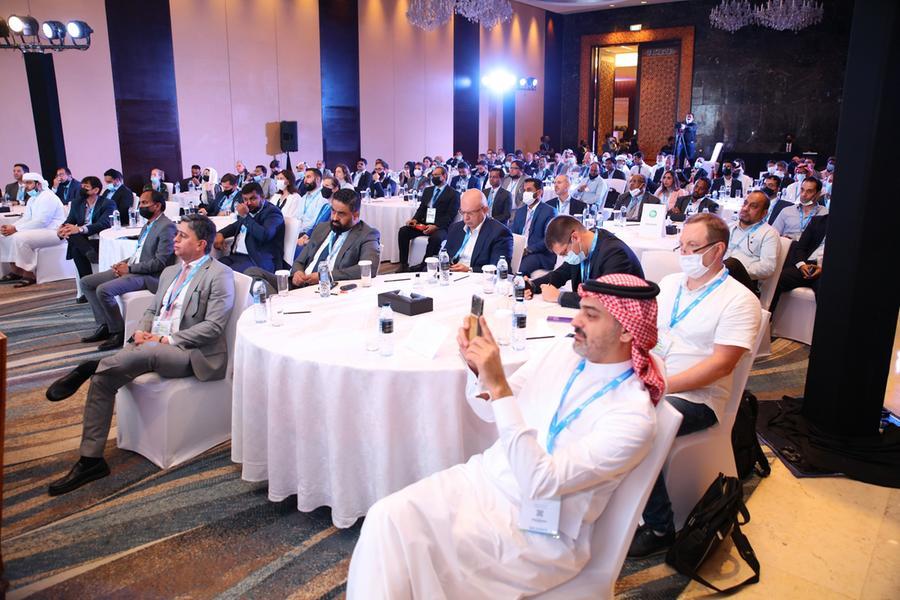 The two-day event discusses project opportunities worth $15 billion (55 billion dirhams), or 10% of the $150 billion global district cooling market. The conference comes at a time when the District Cooling sector is growing at a rapid pace in the UAE, the GCC and the rest of the Middle East and North Africa.

The UAE district cooling market is the largest in the Middle East and is growing at a faster rate, propelled by climatic conditions and increasing infrastructure spending. Many businesses in the region are adopting district cooling systems because of cost effectiveness and long-term service.

At MENA District Cooling Projects Conference, more than 25 international and regional experts gather to discuss the current market outlook, opportunities and challenges of the region’s district cooling industry, which is becoming increasingly popular due to its energy efficiency. More than 20 leading organizations from 10 countries showcase their products and services at the conference through an exhibition.

The event is attended by officials from civic organizations such as municipalities, utility providers, utility operators, contractors, sub-contractors, material suppliers, consultants, engineers, organizations regulators and developers, etc. Conference attendees benefit from tremendous networking and business opportunities, many have secured businesses around the latest projects which are currently in an early stage of execution.

With the goal of net zero emissions announced by the international community by 2050, most countries in the Middle East are now rushing to install new district cooling plants to reduce their carbon emissions. Following in the footsteps of the United Arab Emirates, Saudi Arabia, Bahrain, Qatar, Oman, Kuwait, Egypt and other countries are launching a large number of district cooling projects in the region – which will keep contractors busy and under -contractors for the next 15 to 20 years. , say the experts.

“Saudi Arabia spends a large amount of energy to generate 60,000 MW of electricity to power the economy, of which 60-70% is for air conditioning. However, we are now increasing district cooling supplies to reduce our dependence on energy and make the sector more environmentally friendly and sustainable,” said Suliman Al Khliwi, Managing Director of Saudi Tabreed.

Leila Noubough Nasr, Senior District Cooling Regulatory Specialist at the Abu Dhabi Department of Energy, said the government has put in place a sound regulatory environment for the district cooling sector in the emirate. “We have so far issued four licenses with a licensed capacity of 230,000 RTs in the emirate. One of the main achievements has been the reduction of consumption charges for residential end-users.”

Fares Ahmad, managing director of Emaar District Cooling, said his company has commissioned a new district cooling plant that produces air cooling – using new technology. “With new technologies deployed in our factories, we are currently offering the best cost savings to customers in our network and as more buildings appear in concession areas, efficiencies will improve,” he said. -he declares.

The aim of this conference is to find ways to make district cooling more sustainable and efficient. There are many opportunities to improve plant efficiency through energy retrofits, digitalization, modernization, incorporation of technologies, reduction of drinking water consumption, etc.

District cooling is, by far, the most energy efficient way to cool buildings in arid environments. High reliability and increased energy efficiency are some of the paramount features offered by district cooling systems that will drive business trends. It is ideal for large facilities such as airports, commercial buildings, college campuses and residential towers. The technology is based on a centralized cooling plant, which facilitates cooling within its network through a network of underground pipes carrying chilled water.

The first day of the forum ended with a closing remarks from the conference chair and a networking lunch with a tour of the exhibition.

About the MENA Conference on District Cooling Projects

District cooling has become an important energy-efficient utility sector preferred by governments in the Gulf countries – in which the UAE plays a leading role. The MENA region plays a key role in the fight against climate change and contributes to global efforts to reduce carbon emissions.

Cooling is an energy-intensive and non-stop activity in arid environments, and district cooling offers major energy savings. This advantage materializes in the new and future megalopolises of the region, where district cooling has become strongly established. Nearly 650 GWh of electricity savings were recorded from the use of district cooling in Dubai alone in 2020.

While District Cooling has proven to be the most energy-efficient cooling solution, there are several new methods and improvements to reduce its carbon footprint and reduce potable water usage, thus boosting sustainability.

The MENA region is experiencing rapid growth in cities and communities, increasing the number of upcoming district cooling projects, as well as the need to upgrade existing facilities with energy retrofits. Additionally, District Cooling operators are constantly looking to streamline their processes to facilitate efficient growth, profitability and progress. The district cooling market in the Middle East is expected to reach US$15 billion by 2027.

In light of these developments, Great Minds Event Management is organizing MENA District Cooling Projects, an exclusive forum bringing together all key district cooling players in the region to discuss crucial areas such as modernization, digital transformation, upcoming projects, the energy-water nexus and the latest in joint ventures and partnerships.

Galleries are rolling out the ‘big guns’ for Tefaf Maastricht, but sales…