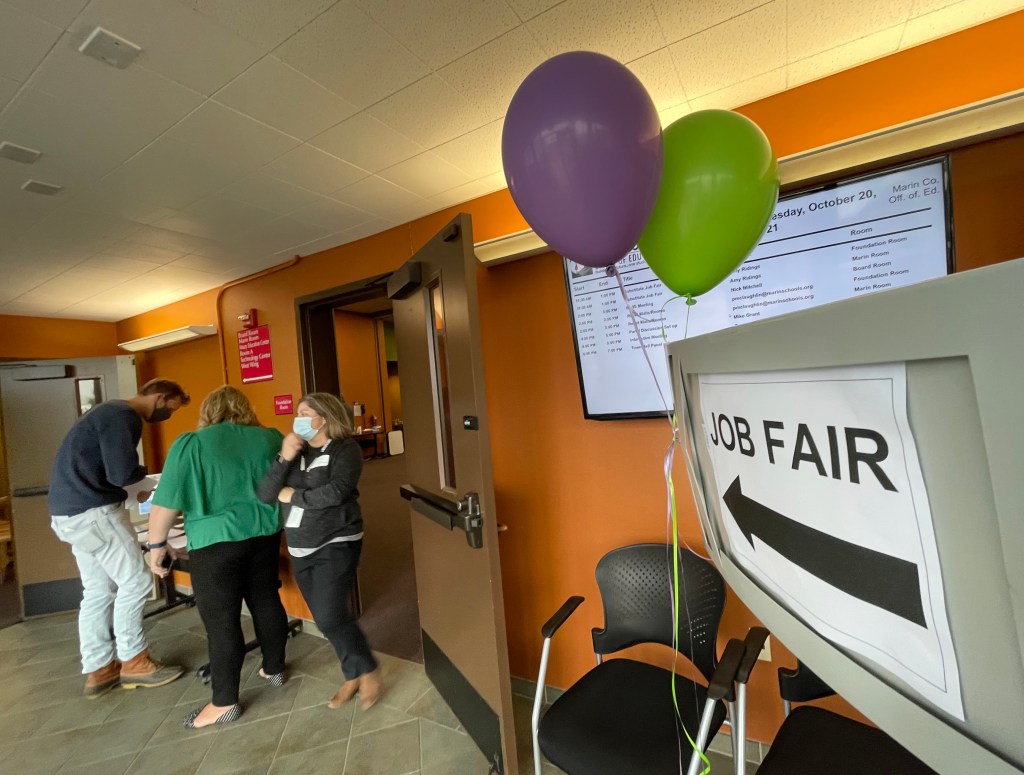 Marin’s unemployment rate falls to a record low of 1.8%

Marin County’s unemployment rate fell to a record low of 1.8% in May, the state’s Employment Development Department reported Friday.

“This happens to tie the all-time low from May 1999,” said Jorge Villalobos, research data specialist with the California Department of Employment Development.

The unemployment report also included data showing that the size of Marin’s workforce and the number of available jobs in the county have not yet returned to COVID-19 pandemic levels.

Marin was tied with Santa Clara County for ranking as the county with the second-lowest unemployment rate in the state. San Mateo County’s rate of 1.7% was the lowest and San Francisco County ranked fourth at 1.9%.

California reported an unemployment rate of 3.4% in May, slightly lower than the national rate of 3.6%.

Six hundred of the new jobs were in the leisure and hospitality sector while another 500 were in education and health services. Retail trade was the only sector with a drop in employment in May; he lost 200 jobs.

Still, Villalobos said Marin County still had 8,100 fewer jobs last month than it did in May 2019, before the pandemic.

“A lot of that is in the leisure and hospitality industry,” Villalobos said, “which lost 3,000 jobs compared to May 2019 and retail which lost 800 jobs.”

One of the reasons Marin’s unemployment rate is so low when there are fewer jobs in the county today than in 2019 is that the size of the county’s labor force has also shrunk.

Responding to the unemployment report, Mike Blakeley, managing director of the Marin Economic Forum, said: “The first thing that jumps out at you is that we’ve fallen below the 2% threshold. This means that we have almost reached full employment. Anyone looking for a job has a job opportunity.

Marin, San Mateo, Santa Clara, and San Francisco generally have the lowest unemployment rates in the state. Villalobos said it was mainly because their residents were well educated. He said they are also working in jobs that allowed them to telecommute during the pandemic.

Blakeley said that in the past, employers in Marin compensated for the county’s low unemployment rate by using higher wages to attract workers from surrounding counties with higher unemployment rates.

However, Blakeley said, the Bay Area’s current “hyperdynamic” economy has led to higher wages and lower unemployment rates in those adjacent counties.

“The whole Bay Area has low unemployment,” Blakeley said. “Contra Costa and Alameda are at 2.7% and 2.5% respectively.”

Speaking at an economic briefing last month, Robert Eyler, the forum’s chief economist, said, “Employers in Marin County are struggling to find workers in our area who want to move or work at the levels current salary.”

Debi Geller, Marin Business Development Manager for recruitment agency Nelson Connects, said: “The first thing we see is that employers are paying more. You have to. Definitely inflated pay scales.

Despite the tight labor market, Blakeley said Marin’s economy has nearly recovered from the slump it suffered at the start of the pandemic.

“We are seeing evidence of sales tax increases at the jurisdictional level suggesting that consumption has certainly picked up,” he said.