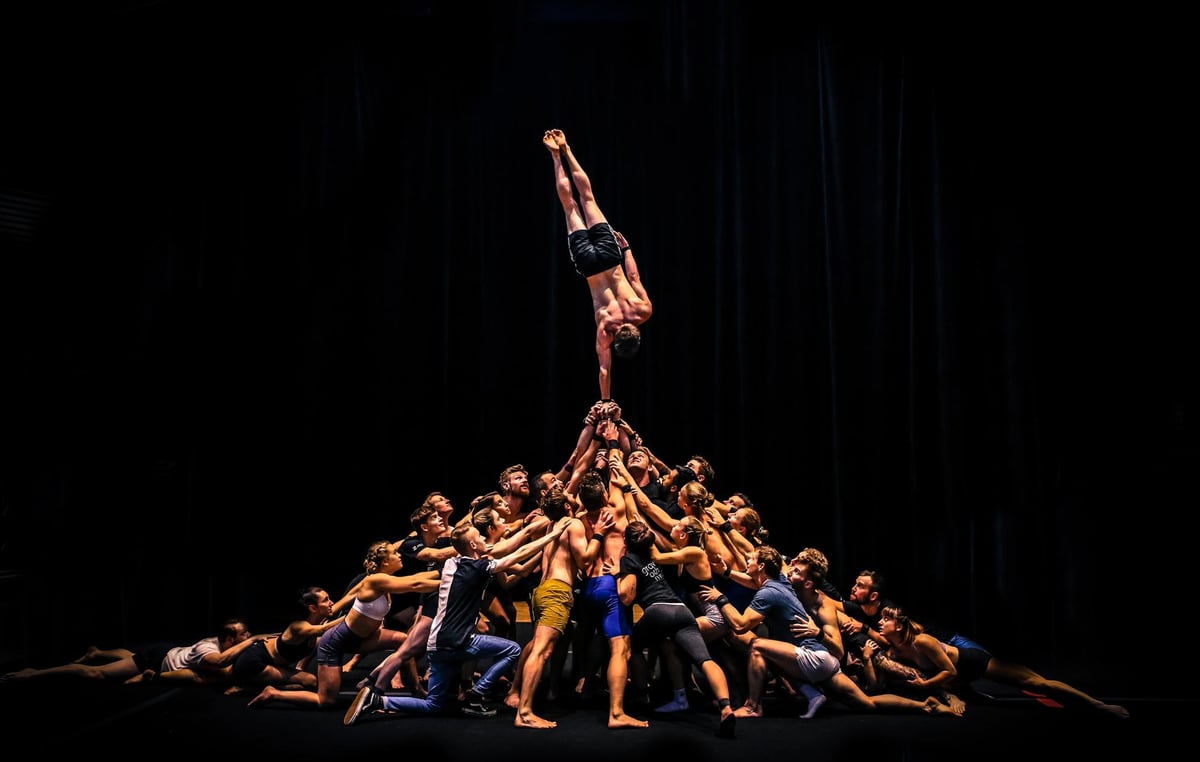 Edinburgh Festival 2022 coverage by The Scotsman: Everything you need to know

This summer, after two particularly difficult years, festivals are set to return to their former glory and – as you’d expect from ‘The Festival Newspaper’ – we plan to bring you as much magic as possible via our hugely experienced team of specialist writers. You can read more about our reviewers below.

The Edinburgh Art Festival starts tomorrow, the July 28, and we will carry out in-depth reviews of all major exhibitions by Duncan Macmillan and Susan Mansfield. On July 30we’ll publish our 12-page preview of the Edinburgh International Festival, in which we offer great reads on some of the most exciting (and spectacular) shows on the EIF’s 75th anniversary programme.

Register to our daily newsletter

In Scotland on Sunday the July 31we will publish the first of our 8-page Festival Guides, then from August 6as the Edinburgh International and Fringe kick off, we’ll be relaunching our 20-page daily Festival magazine in The Scotsman, packed with interviews and reviews.

A scene from The Pulse by Gravity & Other Myths, part of this year’s Edinburgh International Festival program PIC: Carnival Cinema

Our theater critic Joyce McMillan will once again lead her team of Fringe First Awards judges in search of the best new writing about the Fringe, and our arts correspondent Brian Ferguson will seek out the news that matters.

Of August 12our film critic Alistair Harkness will write a daily diary of the Edinburgh International Film Festival, as well as reviews of all major films, and August 13 we will also have daily reports from the David Robinson and Susan Mansfield Book Festival.

Of course, however extensive our coverage is, it is no substitute for reality, so please sign up to our arts newsletter at www.scotsman.com/newsletter for full details of our ticket offers for the festival. The first of these starts tomorrow, when, in partnership with edfest.com, we will be giving away 20,000 tickets to selected shows.

We are also offering a new range of digital subscription options this year. You can choose between a day pass at scotsman.com for £1, a monthly pass for £5, or you can get 50% off an annual subscription. For full details visit www.scotsman.com/subscriptions/summer-sale

Kelly Apter is an Edinburgh-based arts journalist. She has been The Scotsman’s dance critic since 2000 and also writes for The List magazine, is a regular guest on BBC Radio Scotland’s Review program and is a mentor for emerging dance writers at Aerowaves’ Spring Forward festival. .

Mark Fisher is an Edinburgh-based freelance theater critic, editor, writer and journalist. He has written about theater in Scotland since the late 1980s, contributing theater reviews, interviews, art articles and travel articles to newspapers and magazines in Scotland and around the world. His books include The Edinburgh Fringe Survival Guide and How to Write About Theatre.

Rory Ford is a freelance arts and lifestyle journalist who since 1990 has covered Edinburgh festivals for The Scotsman, The Edinburgh News and The List as a critic, editor and journalist. He also starred in Jon Ronson’s ‘Critical Condition’, a Channel 4 documentary about the 1997 Perrier Awards.

Jim Gilchrist is a freelance writer based in Edinburgh, for many years, editor and columnist of articles and art for The Scotsman, to which he still contributes a regular folk and jazz music column as well as reviews. He wrote the Scottish section of Celtic Music (ed. Kenny Mathieson) and co-edited, with Dr Stuart Eydmann, Dolina: An Island Girl’s Journey, the memoir of Gaelic singer, actress and entertainer Dolina Maclennan.

Alistair Harkness is a freelance film critic, feature writer, Q&A host, lecturer and broadcaster based in Glasgow. He began red carpet work for Empire and began writing about film for The Scotsman in 2002, becoming its main critic in 2005. He can often be heard talking about film on BBC Radio and has hosted Q&A Live responses with filmmakers, actors and artists for organizations such as BAFTA, Glasgow Film and Sonica.

Katie Hawthorne is a freelance arts writer living in Edinburgh, specializing in music, live performance and digital technologies. She has been a nominee for the Scottish Album of the Year Award, the BRIT Awards, the BRIT Rising Star Award and a judge for the Scottish Alternative Music Awards. She is also co-host and co-producer of Culture Show, a monthly talk show on Edinburgh’s independent radio station EHFM.

David Hepburn is a lifestyle journalist who writes for The Scotsman and Edinburgh Evening News. He has appeared at various Edinburgh festivals over the past 30 years and has previously been a reviewer for a number of publications including Fringe Report and Fest Magazine.

David kettle has over 25 years of experience in music and arts journalism, including ten years at BBC Music Magazine, two years as an editor at London’s South Bank Center and four years at The Strad magazine. He writes music reviews for The Scotsman and The Daily Telegraph, is Resource Editor at Music Teacher magazine and Program Editor at Scottish Opera.

Duncan Macmillan is Emeritus Professor of Scottish Art History at the University of Edinburgh and former curator of the Talbot Rice Gallery in Edinburgh. He writes art reviews for The Scotsman and is the author of Painting in Scotland: the Golden Age, Scottish Art 1460-1990 and Scottish Art in the 20th Century.

Carol Main is director of Live Music Now Scotland and Live Music Now International Development (UK) as well as a freelance music journalist. She served for almost 20 years on the board of the Edinburgh Festival Fringe and was awarded a Herald Archangel at the Edinburgh Festival in 2002. Carol was awarded an MBE in 2015 for services to music. In April 2021, she was appointed as a Creative Scotland Board Member.

Susan Mansfield is a Scottish freelance writer, art and theater critic and member of The Scotsman’s Fringe First Awards team. She is also a published poet, winner of the 2018 Jack Clemo Poetry Prize and author, with Alastair Moffat, of The Great Tapestry of Scotland: The Making of a Masterpiece.

Fergus Morgan is an Edinburgh-based freelance journalist and arts critic specializing in theatre. His work has appeared in The Stage, The Independent, TimeOut, WhatsOnStage, Vice, Exeunt Magazine and elsewhere, and he also publishes The Crush Bar, a popular Substack newsletter dedicated to emerging theater artists.

Susan Nickalls is a music critic, writer, editor, broadcaster and film producer based in Edinburgh. She recently earned a master’s degree in creative writing and is working on her first novel.

David Pollock is an Edinburgh-based arts writer. He has written about theater for The Stage, The Scotsman, The Independent, The List, The i, the Financial Times and others.

Jay Richardson is a Glasgow-based freelance comedy and arts journalist with 20 years of experience covering the Edinburgh Festival Fringe for the Scotsman. He also writes for British Comedy Guide, Chortle and several national newspapers and magazines and has been published in the US, Canada, Ireland and Australia.

david robinson is a freelance writer and editor, based in Edinburgh. He was editor of The Scotsman and from 2000 to 2015, and has been a newspaper reporter all his working life. A collection of his essays and interviews titled In Cold Ink: On the Writers’ Tracks was published in 2011.

Fiona Shepherd is a music and arts journalist based in Glasgow. She is the main rock and pop critic for The Scotsman and also writes for Scotland On Sunday, The List and Edinburgh Festivals magazine. She is co-founder and co-director of Glasgow Music City Tours and Edinburgh Music Tours, which offer music-themed walking tours exploring the rich musical history of both cities.

Claire Smith is a freelance journalist. She has been involved with the Fringe for many years, has been a judge for the Edinburgh Comedy Awards and the Malcolm Hardee Awards and is a champion of the wild, the quirky and the weird.

Sally Stott is a freelance writer. She has covered the Edinburgh Festival for the Scotsman for the past 15 years, read and written screenplays for the BBC, and won and been shortlisted for various awards as a theater critic, comedy writer and news reporter. travel. She also helps architects, artists and scholars develop and edit their writing.

Ben Walter has been a cabaret critic at Fringe for the Scotsman since 2014. He previously edited the cabaret section of Time Out London and has covered LGBTQ+ cabaret and performance culture for various national and international publications. He has a doctorate in queer fun.Ken Walton has been The Scotsman’s classical music critic for over 20 years. He has also taught music at the University of Glasgow, the Royal Conservatory of Scotland and Hutcheson’s Grammar School in Glasgow.

New-York Historical Society “I’ll Have What She’s Have”: The…